A couple nights ago, we celebrated Elise’s 7th birthday with an Around-the-World birthday party.  We had 12 girls here and we boarded Birthday Airlines and visited 7 different locations on 7 different continents.  It was a fun party to plan and she and the other girls had a great time.  Here are the details!
When each girl arrived, we welcomed them and I took their picture (to put it their passports later), then they went over to see Agent Elise at the US Customs and Immigration table where they were given a passport with their name inside.  I got these cute little passports from Oriental Trading.

﻿Then the girls were given these itineraries to color while we waited for the other guests to arrive:

So, we then all loaded the “airplane” (and all the kids grabbed onto a rope).  We (my husband and I) introduced ourselves as the pilot and flight attendant and we described briefly that we will be visiting different countries and getting souvenirs from each place we visit.

1st stop:  North America – USA – Minnesota – Mall of America
We made a stop at the Mall of America in Minnesota (upstairs in our room) as our USA stop.  There, the girls took turns “shopping” for their luggage to take on the trip.  They also received a USA glitter tattoo and a red, white and blue sucker.  Then we “stamped” their passports for the next stop. 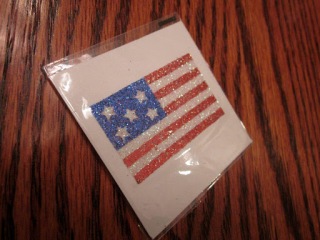 2nd stop: South America – Peru
We flew back downstairs to Peru (the dining room) where all the kids were able to decorate maracas with wood markers. The maracas were the souvenir. 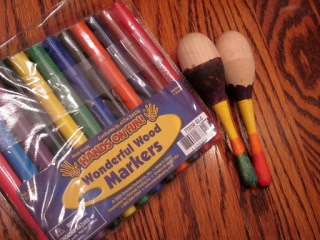 3rd stop: Africa – Kenya
Next up was Kenya (the living room).  Here we played Safari bingo.  I made bingo cards with a lot of different safari animals.  There was no prize for the winner, but the girls had a fun time.  I didn’t have bingo markers, so I used cut up post it notes… worked ok, but they really stuck together, so it was a little difficult for the girls to use, but the good thing was that they stayed in place if they moved or bumped their cards.
The souvenir for Kenya were safari animal charms (2 per child) in a little package I made out of ziplock snack bags (because I forgot to buy tinsy jewelry type ziplock bags… these would have been much better.)  They also got to keep their bingo cards (which they were surprisingly excited about).  🙂
Oh.. and we played African music in the background during the game. 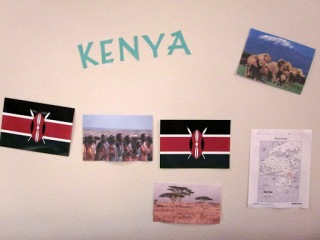 4th stop:  Europe – France
After “stamping their passports”, we headed over to France in the family room.  Here, thanks to Instant Netflix, we watched an episode of Madeline (was supposed to be the one about the Eiffel Tower, but there was a technical issue and they watched the one about the Louvre).  Madeline is a cartoon about a girl from France.  While they were watching the 20 minute show, it gave me time to set out the food and cook the pizza.  After the show, they collected their Eiffel Tower charms (ordered from Etsy and shipped from China… he he) and their Euro chocolates (from World Market) and they took a quick train ride to Italy for some pizza, breadsticks, salad, fruit and juice boxes. 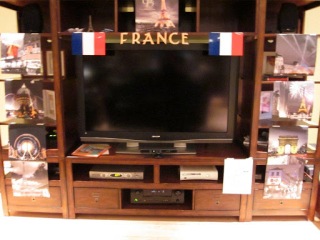 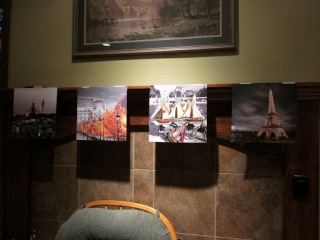 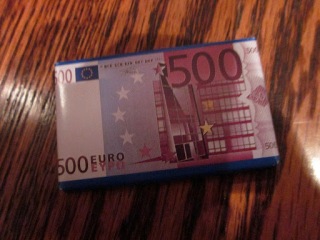 After lunch we headed to our 5th stop:  Asia – China
China needed to be in the entryway (I was running out of rooms).  In China, we played pin the tail on the dragon with a dragon I printed out and taped together to make a large dragon and I printed out extra tails.  (it was hard to find a dragon that wasn’t too scary looking!)  I had also purchased supplies for making a ribbon dragon craft, but the kids were getting a little restless at this point, so I just sent that home to make with their mommies.  It would have been a lot of glueing anyway.  They also got these gorgeous wood fans and a fortune cookie for their souvenirs. 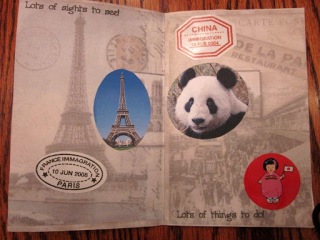 Next, off to the 6th place: Australia
Australia was in Elise’s bedroom and here we played a fun game with the girls.  We formed 2 teams and had a kangaroo hop race (with a globe between their knees).  🙂  Good to get a little of that energy out.  The souvenir was a pink or purple boomerang and an inflatable globe) 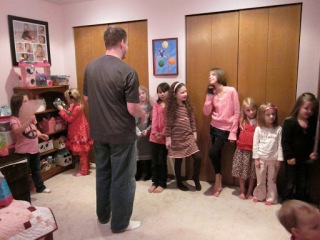 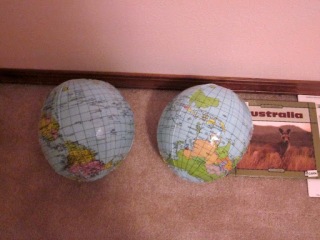 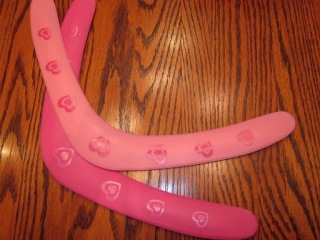 Last stop (bet you can guess): Antarctica
Antarctica was in the kitchen, but we needed tables, so it was more of a fly by Antarctica (too cold to stop there anyway, right?)  The activity for here was melting their ice to find the prize inside.  We gave each girl a cup of hot water to melt their ice cube and inside was a chain (so they could put their charms on it) 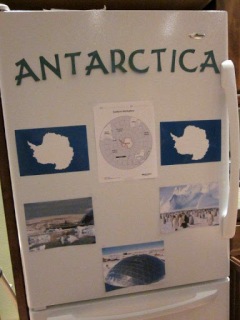 I also printed out﻿﻿﻿﻿﻿﻿﻿﻿﻿﻿ pictures of the kids I took in the beginning onto sticker paper and they put them in their passports above their name.
The plan was to fly back to the US for cake, but we technically never did fly back.  We just stayed where we were, sang Happy Birthday for ice cream cake.  Then, opened presents and the girls had time to free play a little before their parents came to pick them up.  It was a really fun party, I think!  Happy birthday Elise!! 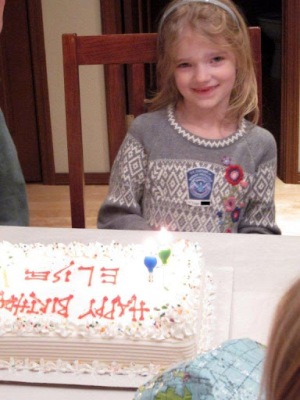