I am She-Ra!  LOL!  I had fun planning my daughter’s 9th birthday party… took me back a few decades.  I totally remember watching She-Ra and He-man from childhood! (Although, I was more of a Rainbow Brite and Wonder Woman fan.) My daughter started watching She-Ra when I saw it on Instant Netflix and she was an instant fan.  But, when she asked about having a She-Ra party, I was actually a little nervous…. how was I going to do that one and where would I find She-Ra stuff 3 decades after it was popular!  Thanks to some helpful facebook friends, I got some good ideas for crafts and games and finally got my creativity rolling for it.
As usual, I will just post pictures and explain as we go!  🙂  Thanks for reading! 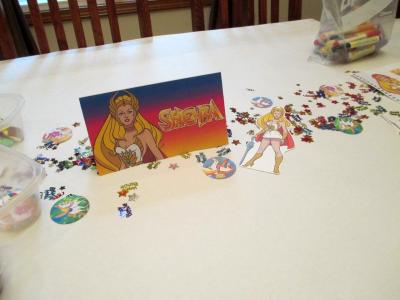 After watching the episode of She-Ra, we did 4 games lumped together… I called it “superhero training”!  The first part of the “training” was finding the crystals hidden around the living room and returning them to the crystal bowl that goes back into the Crystal Castle.

The next game was to throw the suction balls at Sceletor.  What a scary looking character for a girls party, but it was still fun. 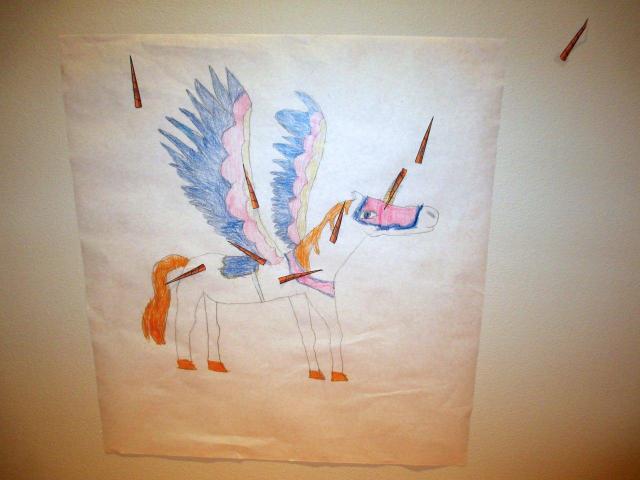 And I don’t have any pictures of the last game of the super hero training, and it was sorta added last minute.  We had unicorn flying lessons.  My girls got stick horses for Christmas, so we had 4 of them.  The party attenders took turns on their horses “pretending they were flying unicorns” following a quick little obsticle course I made up of pillows and around couches, etc.  It was pretty cheesy, but they seemed to like it.  🙂

After cake and presents we did the last craft.  I had originally planned on making She-Ra headbands, but got to thinking… these girls will never get to wear these again because She-Ra’s headband is a little… um… out there (literally).  Anyway, so I found these great headbands on oriental trading and you can use wire to bead around them.  Perfect.  I wish I would have taken pictures of each girl’s creation, but the parents started coming and it got a little hectic.  They were all so different and creative.